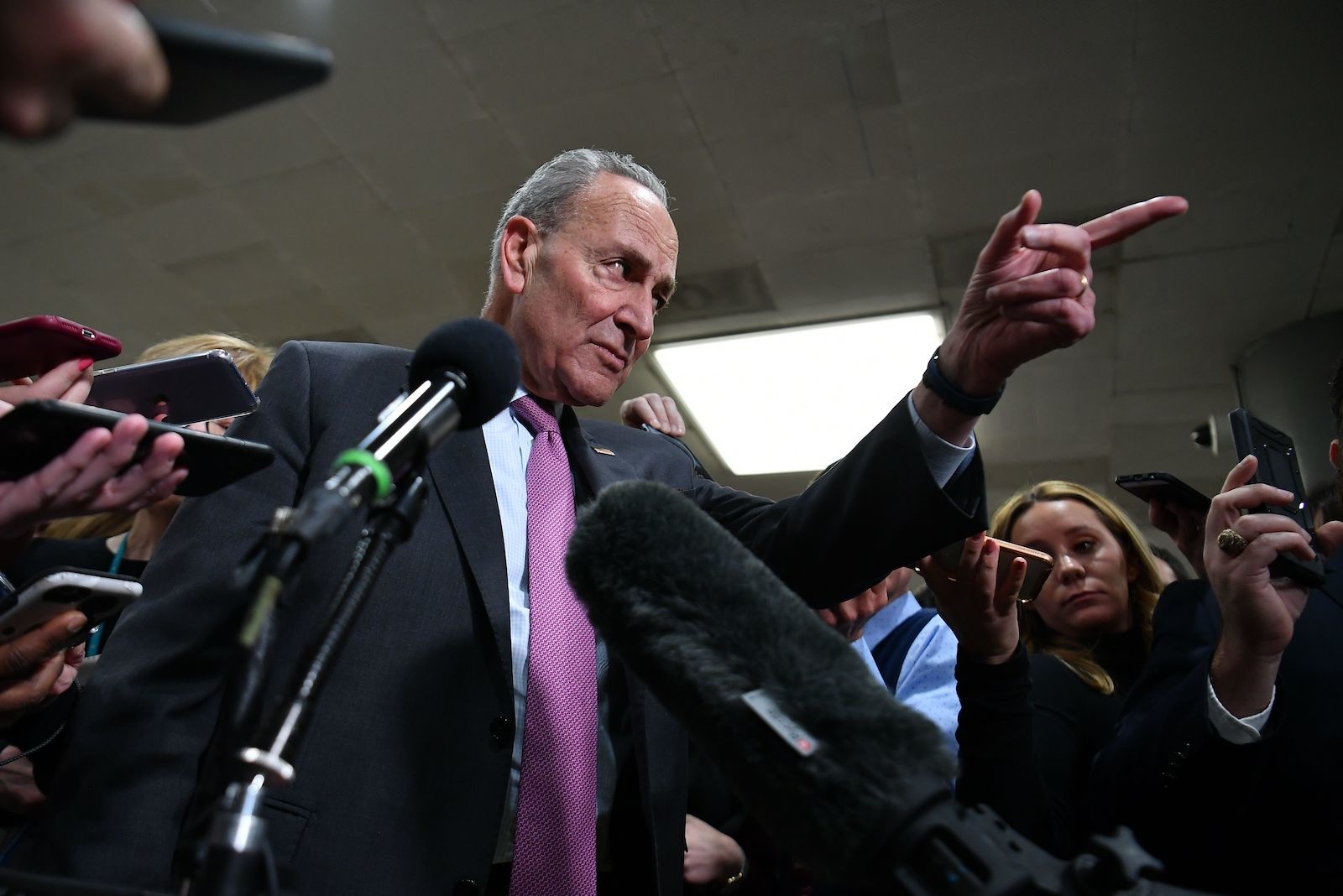 The Senate's top Democrat said that the prospect of a trade-off agreement on calling Hunter Biden and former White House national security adviser John Bolton as impeachment trial witnesses is a no-go.

Amid the heated Senate debate over calling witnesses Tuesday night, the Washington Post reported that "several Senate Democrats are privately discussing" the prospect of such an arrangement and were "sounding out colleagues on whether to back a witness deal that could lead to testimony from former national security adviser John Bolton or other administration officials with possible firsthand knowledge of the Ukraine controversy."

However, while briefing reporters during a break from opening arguments in the impeachment trial on Wednesday afternoon, Senate Minority Leader Chuck Schumer (D-N.Y.) said that deal just wasn't going to happen.

"That's off the table," Schumer said flatly in response to a question posed by Blaze Media. "First of all, the Republicans have the right to bring in any witness they want. They haven't wanted to and that trade is not on the table."

Elsewhere in his remarks, Schumer said he hoped that the roughly 2 1/2-hour opening argument given by lead House impeachment manager and House Intelligence Committee Chairman Adam Schiff (D-Calif.), as well as public pressure on members would motivate Republicans to call for more evidence during the course of the trial.

Republicans have tried to call Hunter Biden — whose past work with the Ukrainian energy company Burisma Holdings while his father, Joe, was vice president is at the heart of the impeachment controversy — as an impeachment witness since the matter was being investigated in the House last year. However, those calls were rejected by Schiff, who said this week that calling Biden at this stage of the process would be "an illegitimate abuse of the trial."

Like Schumer, Schiff also dismissed the idea of a Biden-Bolton witness compromise on Wednesday, telling reporters, "This isn't like some fantasy football trade."

"This isn't 'We'll offer you this if you'll give us that; we'll offer you a witness that is irrelevant in material, who has no relevant testimony, but a witness that will allow us to smear a presidential candidate if you want to get a legitimate witness,'" Schiff continued. "That's not a trade. Trials aren't trades for witnesses,"

Similarly, Democrats have repeatedly demanded that Bolton be called to testify in the Senate trial, given the possibility that his testimony from his time at the White House could prove damaging to the president's case. However, he ultimately wasn't compelled to testify during the House investigation after Democrats decided not to take the White House's immunity claims to court on the matter.

Earlier this month, Bolton said that he was prepared to testify if called by the Senate, saying that he had to "resolve the serious competing issues as best I could, based on careful consideration and study."