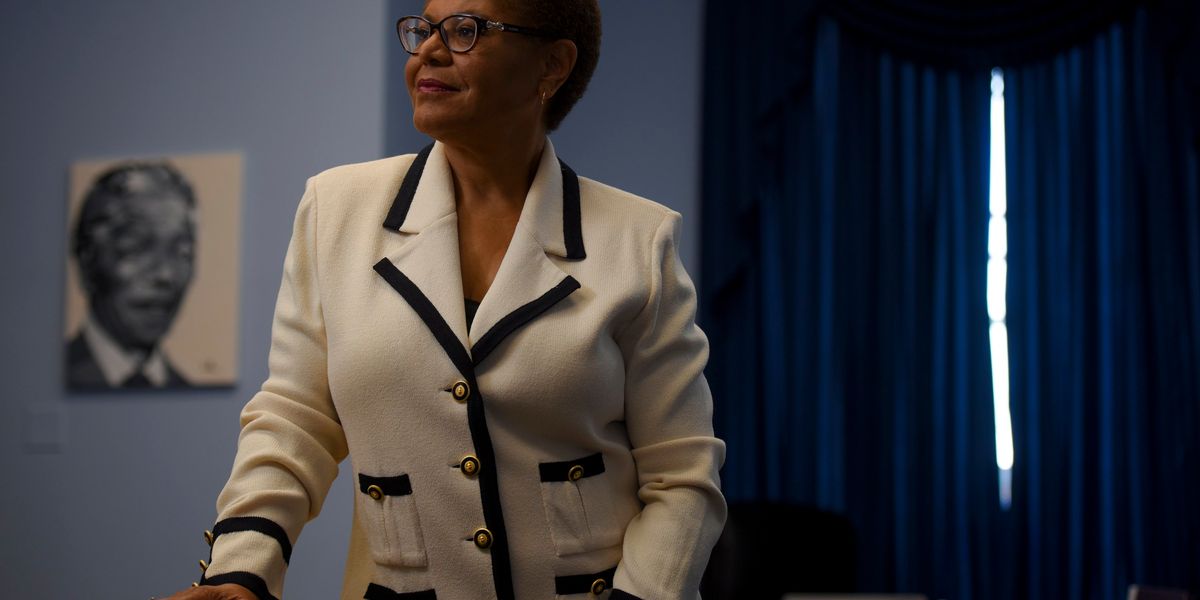 Rep. Karen Bass (D-Calif.) is under scrutiny after reports emerged that she attended Nation of Islam events.

Bass has also reportedly made questionable remarks about Scientology and has a troubling past relationship with Cuba and the Fidel Castro regime.

During a Monday interview with NBC News, Bass insisted, "I'm not a socialist. I'm not a communist. I've belonged to one party my entire life and that's the Democratic Party, and I'm a Christian."

According to Fox News, Bass traveled to Cuba in 1973 with a group called the Venceremos Brigade, which the outlet described as a "joint venture between the Castro regime and left-wing U.S. groups that organized trips for Americans to the country."

Fox reports that during the trip, Bass attended a Fidel Castro speech. When he passed in 2016, Bass reportedly referred to the dictator as "comandante en jefe" — or "commander in chief" — and lamented his death as a "great loss to the people of Cuba."

Of the remarks, she told MSNBC that she would "certainly" not make such statements again.

"I have talked to my colleagues in the House about that," she said, "and it's certainly something that I would not say again. I have always supported the Cuban people, and the relationship that Barack Obama and Biden had in their administration in terms of opening up relations."

She also told NBC News that she didn't consider herself to be a "Castro sympathizer."

She also said that a new perspective about the dictator "developed over time," and insisted that his regime was a brutal one.

On Monday, the Daily Caller reported that Bass took part in Nation of Islam-related events for three years in a row beginning in 2013.

The outlet reported that a spokesperson for Bass said that she never spoke with or met Nation of Islam leader Louis Farrakhan.

Tony Muhammad, director of the Nation of Islam's Western division, lauded Bass and Rep. Maxine Waters (D-Calif.) in 2018, saying that Farrakhan would speak with either of them if they wanted to open up a dialogue about blackness in America.

Muhammad said, "I think our black politicians should stand down. Minister Farrakhan will take a call from a Maxine Waters or Karen Bass. He will stop what he's doing ... come and correct him, he's told him. But don't let anyone tell you I've done something wrong without checking."

In 2010, Bass was embroiled in a controversy after she seemingly praised the Church of Scientology.

During an opening for the "church," Bass said, "The Church of Scientology I know has made a difference, because your creed is a universal creed and one that speaks to all people everywhere. The words are exciting of your founder, L. Ron Hubbard, in the Creed of the Church of Scientology: that all people of whatever race, color, or creed, are created with equal rights."

In a lengthy weekend Twitter statement, Bass insisted that while she did make the remarks about Scientology, she only related to them through a lens of agreeing with equal rights sentiments.

"[I] found an area of agreement in their beliefs — where all people, of whatever race, color, or creed are created with equal rights, which is what my remarks were about," she explained.

“Since then, published first-hand accounts in books, interviews and documentaries have exposed this group," she added. "Everyone is now aware of the allegations against Scientology. Back in 2010, I attended the event knowing I was going to address a group of people with beliefs very different than my own, and spoke briefly about things I think most of us agree with, and on those things — respect for different views, equality, and fighting oppression — my views have not changed."

Just so you all know, I proudly worship at First New Christian Fellowship Baptist Church in South LA. https://t.co/1sEpF5KpRF