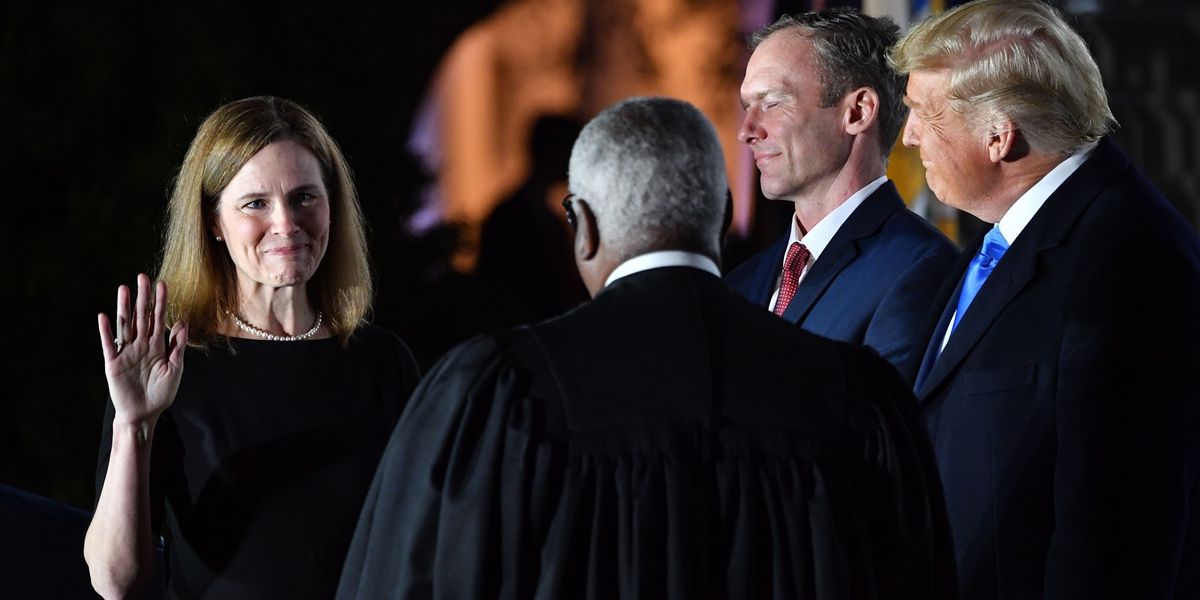 Amy Coney Barrett was sworn in as the newest justice of the U.S. Supreme Court by its longest-serving member, Justice Clarence Thomas, on Monday night, less than two hours after she was confirmed to the high court by the U.S. Senate.

The Senate confirmed the nomination of Barrett by a vote of 52-48.

President Donald Trump praised his third successful nominee to the Supreme Court in a speech, telling his audience on the South Lawn of the White House that Barrett "is one of our nation's most brilliant legal scholars, and she will make an outstanding justice on the highest court in our land."

After thanking a number of Republican leaders who were influential in moving forward Barrett's nomination, the president also acknowledged Barrett's husband, Jesse, who was in attendance. Trump then recognized the Barretts' seven children, who watched the ceremony from their home in Indiana, saying the kids had "become very, very popular in this nation."

"I speak to everyone when I say that the Barrett family has captured America's heart," he added. "It is highly fitting that Justice Barrett fills the seat of a true pioneer for women, Justice Ruth Bader Ginsburg."

The president noted that Barrett, 48, is the fifth woman to serve on the Supreme Court, and the first mother of school-age children to be confirmed.

Justice Thomas administered the Constitutional Oath to Barrett before the crowd of 200 following the president's speech. Chief Justice John Roberts is slated to administer the Judicial Oath to the newest associated justice on Tuesday, after which she will be able to begin her work in the lifetime position.

After being sworn in at the White House, Barrett took to the lectern, thanking the cheering audience, the president, and the Senate, saying, "I thank you for the confidence you have expressed in me, and I pledge to you and to the American people that I will discharge my duties to the very best of my ability."

How did the Democrats respond?

Several congressional Democrats vowed reform and revenge immediately following Barrett's confirmation, after the minority party in the Senate failed to stop Republicans from pressing forward with Trump's latest nominee ahead of Election Day.

Democratic vice presidential nominee Sen. Kamala Harris (Calif.) declared, "Today Republicans denied the will of the American people by confirming a Supreme Court justice through an illegitimate process — all in their effort to gut the Affordable Care Act and strip health care from millions with pre-existing conditions. We won't forget this."

Today Republicans denied the will of the American people by confirming a Supreme Court justice through an illegitim… https://t.co/ZPDbtQDdO3