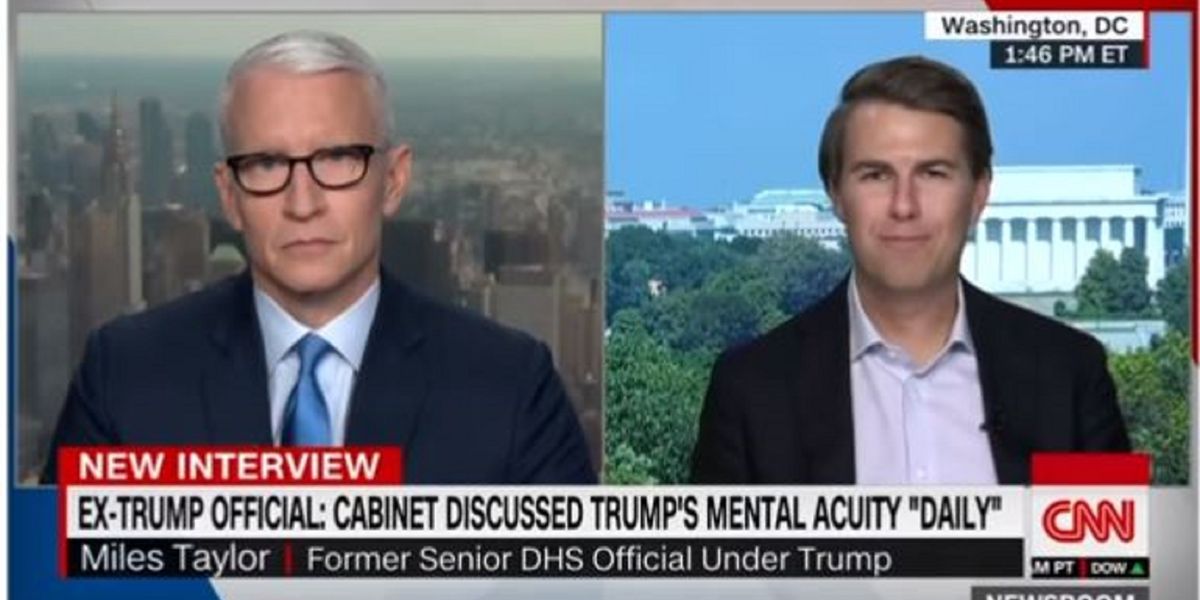 Former DHS-staffer-turned-CNN-contributor Miles Taylor has come out in defense of himself lying outright on air about the fact that he is anti-Trump author "Anonymous" after finally revealing his identity, saying he owes his colleague, Anderson Cooper, "a beer" over the ordeal.

But it was quickly revealed that Taylor recently denied to his current employer and the network's viewers that he is, in fact, Anonymous.

in August, CNN host Anderson Cooper asked Taylor directly, "You're not Anonymous?" to which Taylor replied, "I wear a mask for two reasons, Anderson. Halloweens and pandemics. So, no."

On Wednesday night, Taylor was a guest on CNN host Chris Cuomo's show. Cuomo began the segment by telling the contributor, "First, what matters most, certainly to me: You lied to us, Miles. You were asked in August if you were Anonymous, here on CNN with Anderson Cooper, and you said no."

Cuomo asked, "Now, why should CNN keep you on the payroll after lying like that?"

Taylor answered that he wrote in his book "that if asked, I would strenuously deny I was the author, and here's the reason: Because the things I said in that book were ideas that I wanted Donald Trump to challenge on their merits."

"We have seen over the course of four years that Donald Trump's preference is to find personal attacks and distractions to pull people away from criticisms of his record," he continued, explaining, "I wrote that work anonymously to deprive him of that opportunity and to force him to answer the questions on their merits."

Taylor complained that "to this day," neither the president nor the White House has challenged his writings.

Regarding his false statement on CNN a few months back, Taylor said, "When asked by Anderson whether I was Anonymous during that time period, I said what I was going to do, I temporarily denied it, but I've always said I would ultimately come out under my own name."

"But that said, I owe Anderson Cooper a beer," Taylor told Cuomo. "I owe him a mea culpa, and the same thing for other reporters who at that time period asked me, 'are you Anonymous,' and I said no, because I wanted that work to stand on its own two legs."

The book, titled "A Warning," reached #1 on the bestseller lists at both the New York Times and The Wall Street Journal. Taylor claims he donated much of his proceeds from the deal.

Before moving on to more questions, Cuomo told Taylor, "You know what the problem is with having lied is that now you are a liar, and people will be slow to believe you when you lied about something as important as whether or not you wanted to own this."

.@ChrisCuomo: First, what matters most, certainly to me. You lied to us, Miles. You were asked in August if you… https://t.co/n7YNBHaO2P