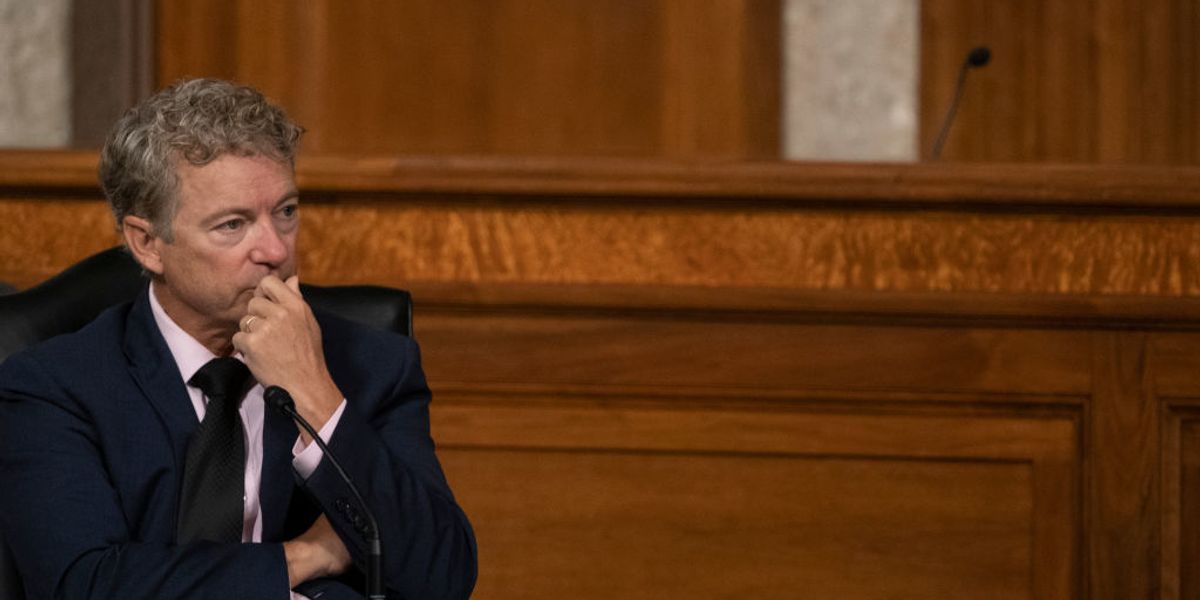 Sen. Rand Paul (R-Ky.) said that the "vast majority" of voting needs to be in person to limit the potential for voter fraud in an interview Monday evening, citing a study about absentee ballots in Pennsylvania that has been flagged by statistical experts as flawed.

Appearing on "The Story" with host Martha MacCallum, Paul said the 2020 presidential election was "unprecedented" due to the high volume of mail-in votes cast because of the coronavirus pandemic. These mail-in votes, Paul claimed, are difficult to "validate."

"This was an unprecedented election," Paul said. "Normally, 99% show up in person and we can kind of police that the right people showed up because you don't have the same people showing up again and again. They sign in, they show an ID, and it's pretty easy to validate the vote."

"But now we have an election where maybe a third to a half mailed in their ballots," he added. "This has never ever happened in our history, so we have to validate, were they the right people?"

Paul cited a statistical analysis from a Williams College professor that purportedly shows more than 89,000 absentee ballots requested by Republican voters in Pennsylvania were not counted or were requested by someone other than a registered Republican. The analysis is part of a sworn affidavit from professor Steven Miller, a Yale- and Princeton-trained math expert, who used data provided by former Trump campaign data chief Matt Braynard. Braynard leads the "Voter Integrity Fund," a group led by former Trump campaign staffers and government employees that is analyzing voter data in key battle ground states looking for evidence of fraud and investigating irregularities.

Pennsylvania on Tuesday certified the results of the presidential election, which former Vice President Joe Biden won by more than 80,000 votes. Paul suggested that if the Trump campaign takes Miller's statistical analysis to court, a judge may be persuaded to order a review of absentee ballots in Pennsylvania.

"I would think that if we took this to a court, the court would then mandate that you have to look at all of the absentee votes one at a time, not count them, but verify whether or not the person who you say voted, you actually call them and ask them, 'did you vote' and 'who did you vote for' to verify the vote," Paul said.

However, the analysis cited by Paul has drawn criticism from statisticians for failing to meet basic standards of statistical analysis and been called "irresponsible" and "naive" by academic peers reviewing the study. Critics who spoke to the Berkshire Eagle say the study was wrong to separate basic mathematical analysis from questions about the validity of the data.

Braynard collected the data by contracting call centers to get in touch with Republican voters across six swing states, in an apparent attempt to root out election fraud, according to reporting from several outlets. He told the Pittsburgh Post-Gazette that his operators were asking voters three questions: "Did a person with your name vote? Did you request a mail-in ballot? Did you return a mail-in ballot?"

In his analysis, Miller wrote that the group called 20,000 Republican voters in Pennsylvania who, according to state records, had requested but not returned ballots. In all, 2,684 agreed to answer questions, he said. Of the respondents, 463 reported that they actually had mailed in a ballot and 556 reported that they had not requested a ballot in the first place, according to the report.

Miller extrapolated from those numbers that between 44,892 and 48,522 Republican voters on the state's list of "requested but not returned" mail-in ballots had, in fact, returned their ballot, only to see it excluded from the state's final vote count. He also estimated that another 40,875 to 53,909 ballots were requested in the name of a registered Republican by another person.

Miller's colleagues have challenged the data collected by the Voter Integrity Project as "completely without merit" and criticized Miller for publishing his analysis without addressing concerns about the data.

"To apply naïve statistical formulas to biased data and publish this is both irresponsible and unethical," said Richard De Veaux, vice president of the American Statistical Association and a colleague of Miller's in the Williams College Department of Mathematics and Statistics. "It is the statistician's responsibility to verify the data, or to provide disclaimers if that can't be done."

Carina Curto, a professor of mathematics at Pennsylvania State University, said Miller's analysis is "almost surely wrong" because it assumes that the people who answered the phone were a representative sample of Pennsylvania Republican voters who requested but did not return a ballot.

"This small sample from the phone survey almost surely has large sampling biases and systematic errors," said Curto. "There is absolutely no reason to believe it is representative of the larger population."

"There's no guarantee that the people they talked to were the actual people they meant to call," added Lior Pachter, a computational biologist at the California Institute of Technology. He said the Voter Integrity Project should have also contacted Democratic voters as a control group.

"What happened here is somebody had a question, to which they had an answer they had decided on ahead of time," he said. "At a minimum, if they actually wanted to figure out if there was election fraud, they would have also polled Democrats."

Miller responded to his critics, apologizing for a "lack of clarity and due diligence" in his analysis.

"Especially as the consequences are so important, I should have made a greater effort to go deeply into and share how the data was collected and not treat this solely as an independent calculation," he told the Berkshire Eagle in a statement.

He defended the decision to do the analysis.

HIs results "should encourage more analysis of this important problem so we can see how well things worked and, if there are issues, how we can do better in future elections."

Regarding future elections, Sen. Paul told Fox News that voting in person is "the easiest way to validate an election is to vote in person."

"I'm not against voting early or having early voting, but the majority of the vote, the vast majority, needs to be in person because there are so many checkpoints," he added.

"In the future we have to go back to in-person voting. We can't just say oh, here's a ballot, we're going to mail it to anyone. I think it's ripe for fraud."