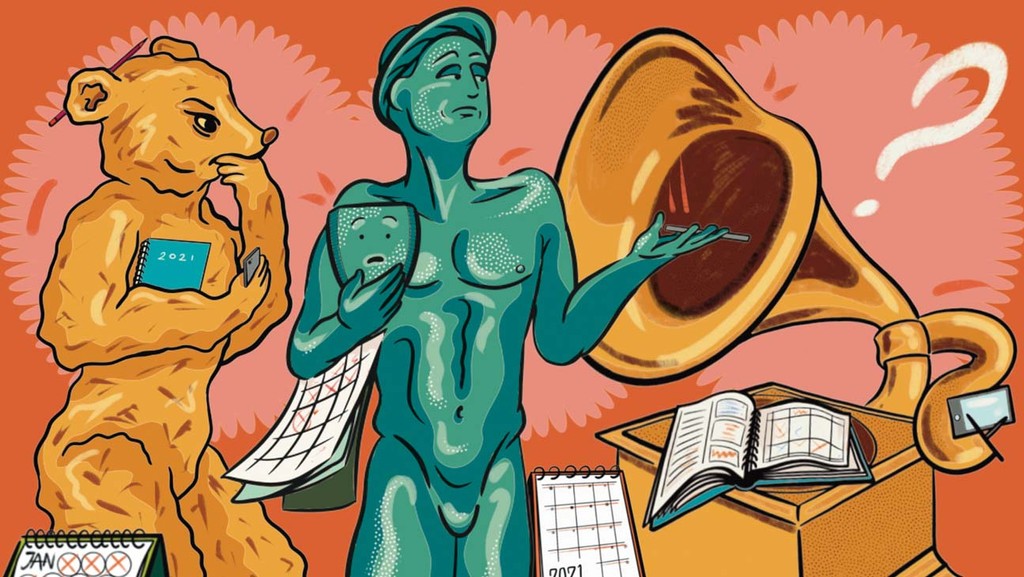 The Oscars’ April 25 date appears safe, but the Grammys are on the move and the SAG Awards may be next, while Sundance is slimming down and Cannes is drawing up COVID-19 contingency plans.

With COVID-19 cases showing no sign of abating, organizers of Hollywood awards shows and global film festivals are grappling with whether to postpone or scuttle their planned industry events. On Jan. 5, Sundance opted for a version of the latter by canceling its Los Angeles-area drive-in screenings because of a spike in COVID-19 cases in Southern California.

That move came on the heels of the Grammys’ postponement of its Jan. 31 ceremony. The SAG Awards, which are scheduled to take place March 14 — the same date now claimed by the Grammys — may be the next to move, sources say, while the Feb. 28 Golden Globes are a question mark.

When Sundance pulled the plug on its planned outdoor screenings, it caught some filmmakers off guard. The festival sent an email to producers and directors just one hour before the news broke. In a letter to filmmakers obtained by The Hollywood Reporter, festival director Tabitha Jackson and director of programming Kim Yutani wrote, “We ultimately came to the conclusion that it would not be safe or responsible to move forward with [the screenings].”

A rep for one Sundance film affected by the decision described being “disappointed” by the move but seeing it as understandable. “It’s a mess here [in L.A.],” says the rep. “Everyone’s in a horrible position.”

The Oscars, which are scheduled to take place April 25 in person, appear to be safe for now. Writer-producer Eric Roth, who is on the Academy’s board of governors, tells THR that organizers are “doing everything possible in the world to have an Oscar ceremony of some kind.” Still, the prospect of convening industryites in theaters — be it the Kodak for the Oscars or the Palais in Cannes — remains a challenge.

As such, all eyes are on the 74th Cannes Film Festival to see if it will move from its current dates of May 11-22 (Berlin already has pivoted to a stripped-down, virtual version of its festival in late February and moved the accompanying market to online). Cannes Festival director Thierry Frémaux has outlined an alternative strategy, with plans to hold the French festival in late June or early July if COVID-19 figures make the May date untenable.

But pushing Cannes too far would create disruption in the delicate fall festival ecosystem. Venice — set for Sept. 1-11 — could end up in a battle with Cannes for world premieres of top titles. The fall fests, including Toronto (Sept. 9-19), San Sebastian (Sept. 17-25) and London (Oct. 6-17), typically don’t compete directly with Cannes for titles and could even benefit from the prestige of screening Cannes’ buzzy films soon after they premiere on the Croisette.

Similarly, industry trade fairs like April’s Mip-TV are modifying their plans. The international television trade fair held in Cannes every Spring, will be online-only for the second year in a row, though the accompanying TV festival, Canneseris, is set to take place in person from April 9-14. Fall TV market Mipcom is still planning a physical event from Oct. 11-14, but will have a digital component running alongside.

Even in Asia, where infection rates are low by global standards, expectations for a truly international festival calendar are dim. The Hong Kong Festival and Filmart industry confab in March have shifted entirely online. China’s Beijing and Shanghai festivals both took place last year after lengthy delays but became domestic affairs with the country’s borders closed.

The same arrangement is expected throughout the Chinese industry for 2021 when the Beijing festival arrives in April and the Shanghai event in June. Hopes are high that the region leading Busan International Film Festival will be able to welcome global guests in October, but organizers say any decision remains far off.

As for the Oscars, The Trial of the Chicago 7 producer Marc Platt sums up the sentiment of many right now given bleak headlines about overflowing hospitals: “Sure, we’d love for there to be an awards ceremony, but it doesn’t seem like the world absolutely has to have one right now.”

Patrick Brzeski and Alex Ritman contributed to this report.

This story first appeared in the Jan. 13 issue of The Hollywood Reporter magazine. Click here to subscribe.