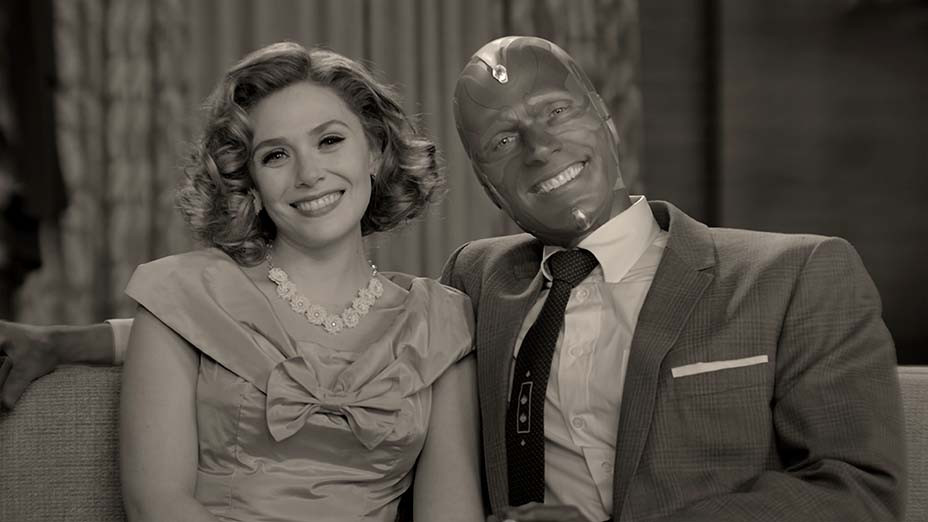 Elizabeth Olsen's Scarlet Witch and Paul Bettany's Vision are trapped in a loop of familiar sitcom plots in Marvel and Disney+'s first project blending the worlds of film and TV.

In departing to Disney+ for a new generation of superhero television tied to its blockbuster film franchises, Marvel distanced itself from the branded shows that filled Netflix queues for years. Though none were unqualified successes, it would be wrong to downplay the visceral fight choreography and Catholic angst of Daredevil, the electric Black consciousness-raising of Luke Cage, the rich subtext and lead performance at the center of Jessica Jones or the sheer schedule-clearing pleasure of being able to quit watching Iron Fist.

The Marvel/Disney+ era kicks off with WandaVision, which through its first three episodes seems determined to be the comic giant's oddest TV property to date. WandaVision may not be weirder than Guardians of the Galaxy, which still has a talking raccoon and an adolescent sapling, but there's something creatively courageous about handing a postmodern exploration of sitcom conventions to an audience expecting snazzy suits and explosions. Expect a merited mixture of confusion and TV-nerd joy from viewers in response to a show that has picked a distinctive lane and commits to it.

As it can best be explained, the series takes place sometime after the events of Avengers: Endgame and finds Wanda Maximoff (Elizabeth Olsen) and Vision (Paul Bettany) living in domestic bliss like something out of a sitcom. Exactly like something out of a sitcom. They're in black-and-white, framed in a 4:3 aspect ratio, and when they flirt or endearingly bicker, a studio audience roars in approval. In the eerie suburban community of Westview, they have a wacky, nosy neighbor (Kathryn Hahn's Agnes), commitments to local civic organizations and a desperate desire to assimilate despite Wanda being a witch and Vision being a powerful android. And they have a growing suspicion that something about their cul-de-sac tranquility is very wrong.

The suspicions grow as head writer Jac Schaeffer (Black Widow) and director Matt Shakman (The Great) steer Wanda and Vision through an evolving series of sitcom styles — starting with the boxed-in multi-cam aesthetic of something like The Dick Van Dyke Show, moving into a slightly more expansive filmed aesthetic à la Bewitched and bursting into the technicolor style of a Brady Bunch or Mary Tyler Moore Show. Each episode is full of peculiar hints at a larger mythology, but also features a vintage plot like Wanda and Vision struggling to throw together a last-minute dinner party for Vision's boss and his wife (Fred Melamed and Debra Jo Rupp). Each step up the sitcom ladder is accompanied by Easter egg-laden commercials, catchy theme songs from Kristen Anderson-Lopez and Robert Lopez and expertly reproduced period details from production designer Mark Worthington and costume designer Mayes C. Rubeo.

You can latch onto the elements of building paranoia, with shades of The Truman Show or Blue Velvet-era David Lynch, but be warned that WandaVision is methodical and in no rush to give you Avengers-style thrills. Even the special effects are delivered with an expensive austerity and polished quaintness.

Even with its slow-building sense of menace, WandaVision has more in common with a meta-sitcom like Get a Life or That's My Bush — half-hours built around tweaking the conventions of the format — than a comic book show. It's like Marvel's Too Many Cooks, in reference to the 2014 viral short in which the credits for an ultra-sunny TGIF-style sitcom begin to fold in on themselves and become a postmodern nightmare. Did I find this delightful? Often! Is there a core demo this will flummox? To be sure!

This is in all ways a better acting vehicle for Olsen and Bettany than anything they've been given to do previously in the MCU. If you were looking for charming stars to convey a Mary Tyler Moore/Dick Van Dyke vibe, you couldn't do much better as Olsen and Bettany get to spell out the sweet chemistry that the movies have only hinted at. Freed from that peculiar "Sokovian" accent from the films, Olsen is all wide-eyed reactions and crackling comic delivery, holding her own opposite Hahn, always the most potent of scene stealers. Bettany rediscovers the lanky physical comedy he honed earlier in his career and even, in one scene, marvelously channels Peter O'Toole at his drunken peak. Both leads are good at letting glimpses of vulnerability and uncertainty emerge, as is Teyonah Parris as a neighbor who introduces herself as "Geraldine."

It's fair to wonder, especially once Parris shows up, how the show is interpreting the development of the traditional TV sitcom and these hermetically sealed environments that were, for much of the medium's history, dominated by shades of whiteness. Schaeffer and her writing staff are echoing genre classics, but in Wanda and Vision's progression through decades and styles, we're reminded of how often the sitcom has needed to reinvent itself to remain fresh — and of how resistant the means of production has been to letting certain people's stories be told.

Sitcoms have simultaneously enabled audiences to embrace difference and birthed repetitive tropes that kept individuality from being expressed. What does it mean when our avatars of otherness are a soulful maroon robot and a grieving immigrant with telekinetic powers? I guess we're going to have to watch to see. The meta-comedies I've mentioned all blur the line between celebrating sitcom hackiness and critiquing it. It's too early in WandaVision for me to be sure which is happening here and in what ratio.

At only 30 minutes per episode, these opening three chapters of WandaVision come close to mirroring traditional sitcom economy. That makes it easier to go along with the the show's emphasis on noodling rather than pushing the story past what trailers have revealed. I'm curious how much the show will open up in its last six episodes. But there's a big part of me that would be perfectly content to just let WandaVision be an eccentric oddity and to know that there's room for that under the Marvel banner.