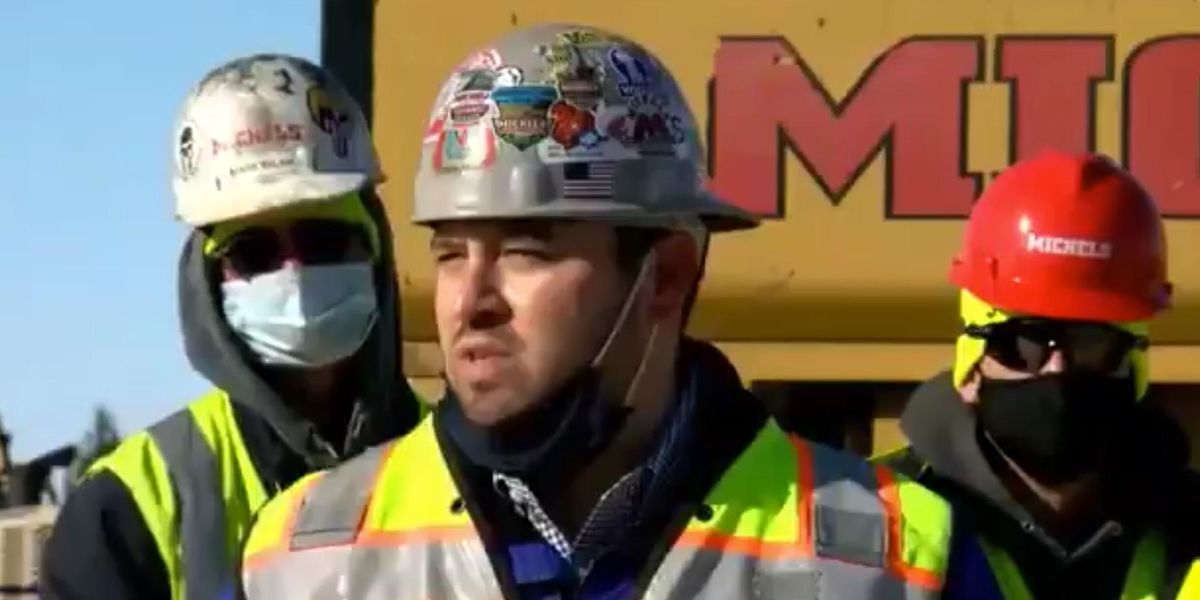 A construction manager working on the Keystone XL pipeline made clear last week that President Joe Biden's executive order canceling the key contract for the oil pipeline had an immediate impact on American jobs.

A video posted by the Washington Examiner shows a general manager working on the pipeline explain that the project was responsible for "thousands of jobs," but as a result of Biden's executive order, "hundreds of guys" had already been laid off.

The manager — who was identified by the Milwaukee Journal Sentinel as Josh Senk, a general manager for Michels Corp., one of the subcontractors working on the pipeline — explained that many of those who have been laid off are from Wisconsin.

"There's hundreds of guys that got laid off," Senk explained last Friday.

A manager of the Keystone XL pipeline says hundreds of workers have already been laid off because of @JoeBiden's ha… https://t.co/b7GIRygm7V

Halting construction of the pipeline was one of Biden's first actions as president, taken no doubt to appease progressive environmentalists and climate hawks.

Biden's order declared, "The United States must be in a position to exercise vigorous climate leadership in order to achieve a significant increase in global climate action and put the world on a sustainable climate pathway. Leaving the Keystone XL pipeline permit in place would not be consistent with my Administration's economic and climate imperatives."

How many jobs are at stake?

Sen. Ted Cruz (R-Texas) has been a leading voice speaking out against Biden's order.

During the Senate confirmation hearing last week for Pete Buttigieg, who is Biden's nominee for transportation secretary, Cruz grilled the former South Bend mayor about the job toll of Biden's order.

"And with the stroke of a pen, President Biden has told those 11,000 workers, those union workers, 'Your jobs are gone,'" Cruz said.

The Washington Post later fact-checked Cruz's claim that Biden's order nixed 11,000 jobs, essentially concluding that, yes, Biden did, adding the snide caveat that most of the jobs are temporary. "Cruz cited a real estimate of approximately 11,000 jobs, but he left out that they were all temporary. In the same report, the State Department said the Keystone XL pipeline, if built, would require only 35 to 50 permanent positions," the Post said.

Unions, including at least two that endorsed Biden, have since blasted him for revoking the key construction permit.

The the Laborers' International Union of North America, which endorsed Biden, reacted last week, "#Pipeline construction has been a lifeline for many #LIUNA members across the country. The anticipated decision to cancel the #KeystonePipeline will kill thousands of good-paying #UNION jobs!"

Andy Black, president and CEO of the Association of Oil Pipe Lines, said, "Killing 10,000 jobs and taking $2.2 billion in payroll out of workers' pockets is not what Americans need or want right now."

The United Association of Union Plumbers and Pipefitters, which endorsed Biden, also condemned the new administration.

"While we welcome the President's commitment to fight climate change, we are disappointed but acknowledge the President's decision to fulfill his election campaign promise on Keystone XL," Trudeau said last week.