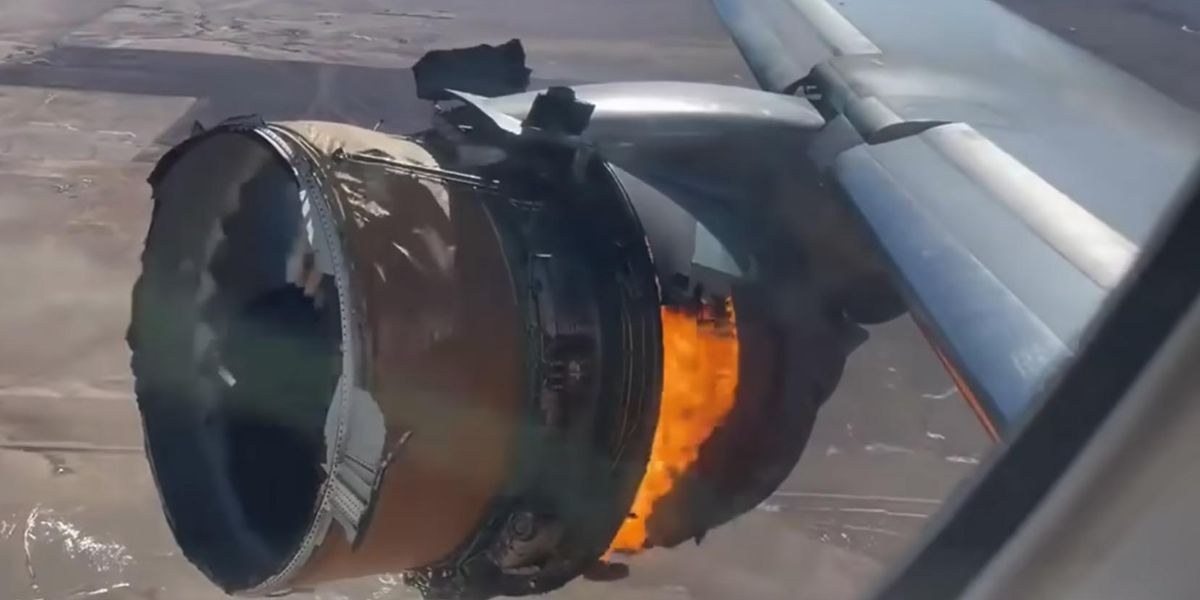 A United Airlines flight bound for Honolulu was forced to make an emergency landing on Saturday after the Boeing 777-200 plane experienced a massive engine failure just minutes into flight.

Video of the exploded engine went viral on social media, as did pictures that showed pieces from that engine land in residential areas near Denver, Colorado.

Just minutes after departing Denver International Airport, the pilot of United Airlines flight 328 sent a distressed "MAYDAY" call over air traffic control communications to report "an engine failure," and request an immediate return to the airport.

Video of the exploded right-wing engine, with missing pieces and on fire while still in the air, quickly went viral on social media.

"I looked out the window and I saw the engine," she said. "I noticed it was just shaking a lot. And I thought, well, it's the turbulence."

"And then as I was looking at it, it just blew fire. And that ring thing around it just flew off and then it was just smoking. And I was just like, 'Oh my gosh, I don't know what's going to happen next,'" she explained.

Shockingly, Underwood said many passengers were unaware of what had happened.

"I was on the window on the right side, and nobody saw it except the people that were on the window and nobody screamed. And like I looked over and people were still reading their books. They kind of didn't know what was going on," Underwood told Hawaii News Now.

Pictures showing debris from that exploded jet engine also circulated on social media. The debris fell over Broomfield, a suburb of Denver.

Kieran Cain told NBC News he was playing basketball with his kids in Broomfield when he witnessed the debris rain from the sky.

"We heard a gigantic boom and, as we did that, we saw a huge puff of smoke and then stuff started falling out of the sky," he said. "That's when I called 911."

Did the plane land safely?

Fortunately, the plane was able to land without further complications. The plane was carrying 231 passengers and 10 crew members.

There were no injuries.

The National Transportation Safety Board will lead the investigation into the incident, the Federal Aviation Administration said in a statement.