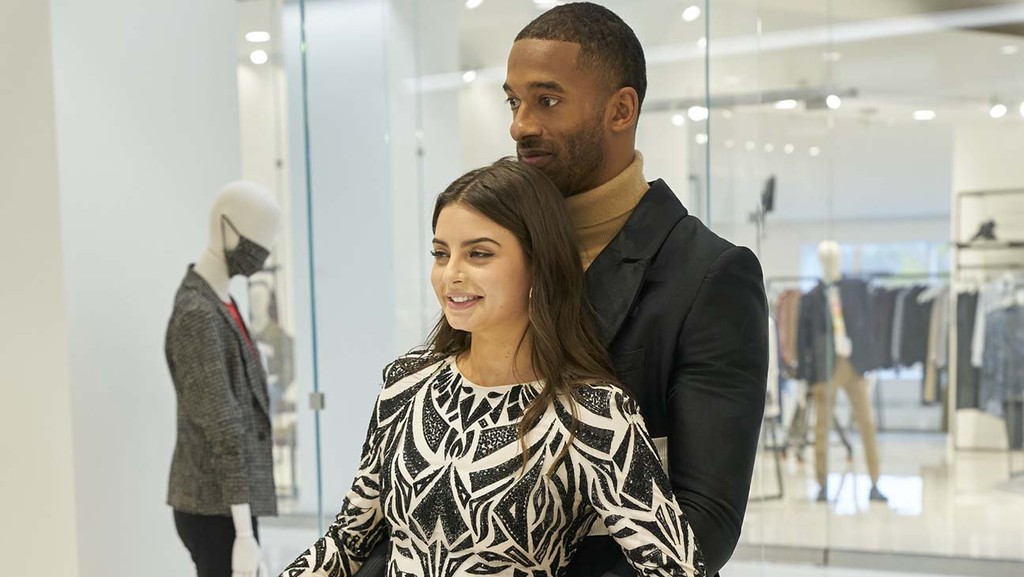 "It has also pushed me to reevaluate and process what my experience on 'The Bachelor' represents, not just for me but for all of the contestants of color," said the ABC star in a statement on Monday night.

The Bachelor star Matt James has spoken out amid the ABC franchise's ongoing racism controversy, calling the developments in recent weeks "devastating and heartbreaking to put it bluntly."

In a statement posted to his social media on Monday night, the first-ever Black Bachelor addressed the racist allegations that came to light about one of his frontrunners, Rachael Kirkconnell, and the problematic interview between Chris Harrison and franchise alum Rachel Lindsay that resulted in the veteran host taking a hiatus from the show, and that has sparked a dialogue from Bachelor Nation about larger race issues among the hit reality series.

"The past few weeks have been some of the most challenging of my life, and while there are several episodes left of the season, it is important that I take the time to address the troubling information that has come to light since we wrapped filming, including the incredibly disappointing photos of Rachael Kirkconnell and the interview between Rachel Lindsay and Chris Harrison," wrote James. "The reality is that I'm learning about these situations in real time, and it has been devastating and heartbreaking to put it bluntly."

James released his statement shortly before one of his final episodes was set to air on Monday, and his decision to speak out is notable, given that he is currently the star of the veteran franchise and under contract. Up until now, the star had taken to his Instagram Stories to say he supported Lindsay after the Harrison interview and that he was joining the call for change and accountability from the franchise.

Speaking specifically about Harrison defending Kirkconnell (who attended an "Old South" antebellum-themed college party in 2018) during a widely circulated 14-minute Extra interview, James said, "Chris' failure to receive and understand the emotional labor that my friend Rachel Lindsay was taking on by graciously and patiently explaining the racist history of the Antebellum South, a painful history that every American should understand intimately, was troubling and painful to watch. As Black people and allies immediately knew and understood, it was a clear reflection of a much larger issue that The Bachelor franchise has fallen short on addressing adequately for years."

Noting the "critical conversations and reporting" that has been sparked in these final weeks of his historic season, James said important questions have been raised and have "resulted in inspiring displays of solidarity" from the stars of the franchise. Most notably, his cast of women — who make up the 19-year franchise's most diverse group ever — released a joint statement to denounce any defense of racism and call for accountability before Harrison stepped away indefinitely.

"It has also pushed me to reevaluate and process what my experience on The Bachelor represents, not just for me but for all of the contestants of color, especially the Black contestants of this season and seasons past, and for you, the viewers at home," he added.

In closing, James said viewers will hear more from him in the end, presumably during the upcoming live After the Final Rose finale, which has yet to name a host since Harrison announced he would be stepping aside for the remainder of the season.

"My greatest prayer is that this is an inflection point that results in real and institutional change for the better," he said, reinforcing growing calls from the talent of Bachelor Nation for the franchise, ABC and producers Warner Bros TV. to enact change, accountability and action amid the backlash.

Allegations of Kirkconnell's racially insensitive behavior first circulated at the start of James' historic cycle, which debuted Jan. 4. Harrison's comments were made six weeks later amid Kirkconnell's silence (she has since spoken out) during an interview with Lindsay, who was the first Black Bachelorette in 2017. When Harrison was pressed about the "Old South" party photos, he argued to Lindsay, "Well, Rachel, is it a good look in 2018, or is it not a good look in 2021? Because there’s a big difference." He questioned the "lens" of 2021 compared to 2018 and asked people to give Kirkconnell the "grace" and "compassion" to explain herself.

The interview received swift backlash over both his problematic defense for the contestant and his treatment of Lindsay. Even after he stepped aside, the moment has lit a fire under the vocal alum of the franchise, who are continuing to call for systemic change when it comes to representation moving forward on social media and on their podcasts. There is also a Bachelor Diversity Campaign calling for Harrison to be permanently removed.

Heading into the most recent seasons of The Bachelorette and The Bachelor, the producers of the ABC franchise had made changes behind the scenes and in casting in hopes of setting the franchise on a more inclusive track in 2020. Years of fan calls for the franchise to diversify its majority white reality series culminated in the show taking action in wake of the nationwide racial reckoning in the summer of 2020. The show hired more producers of color, brought in a diversity team to work with the cast and crew, and cast leads of color and the most diverse casts in the history of the show.

Weeks of pre-taped episodes remain before the live finale show — which is less than one month away — that have already been taped with Harrison at the helm, including the recently filmed Women Tell All reunion. No plans have been announced to edit Harrison from the show.

Kirkconnell is already a top four finalist heading into Monday night's episode. Since she was absent from the Women Tell All and remains in the competition, the After the Final Rose will be her first opportunity to address Bachelor Nation following her statement on Instagram, where she noted that she is "learning and will continue to learn how to be antiracist."

Given James' statement, the issues that have come to light since filming about Kirkconnell are affecting him deeply. If Kirkconnell wins, James' season would follow several recent seasons, where developments after filming change the ultimate ending by the time the live show airs. Most recently, Peter Weber's live finale for The Bachelor's 2020 season was so tense, he was the first star in recent memory to skip the post-season media tour after the finale (he and his winner split shortly after). And The Bachelorette season prior to that with Hannah Brown ended with a broken engagement after Brown discovered troubling post-show information about her winner.

The most recent season of The Bachelorette, however, ended more traditionally with both Clare Crawley and Tayshia Adams walking away with their winners. Though Crawley has since split from Dale Moss, Adams and Zac Clark remain together.