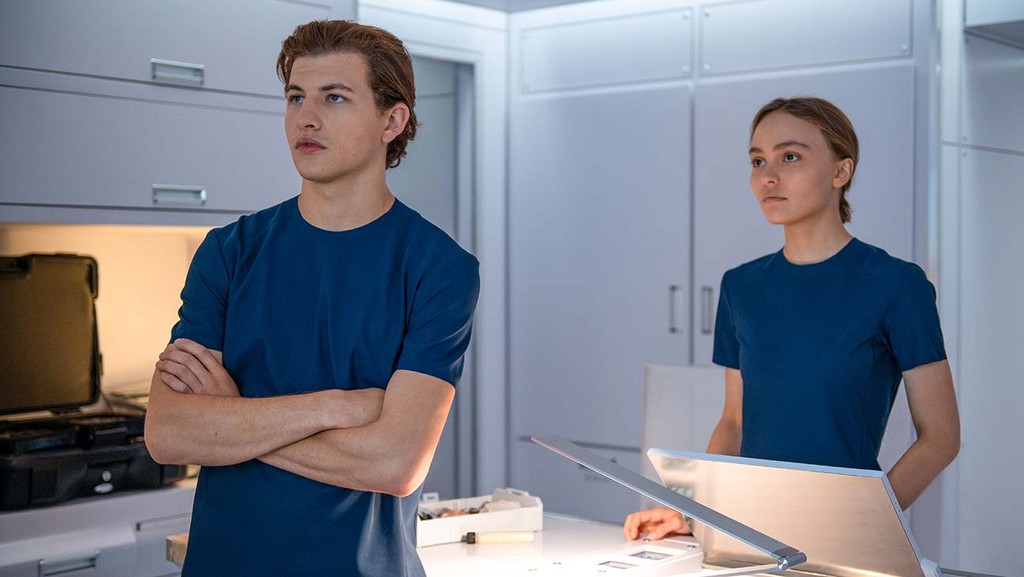 Writer-director Neil Burger's visually alluring but dramatically underpowered sci-fi thriller about an interplanetary mission blitzed by a hormonal explosion, Voyagers, is basically Lord of the Flies in space. Or Passengers without hypersleep pods. Either way, it's not terribly original. A solid cast and stylish design work in a spacecraft whose endless corridors become sprint lanes for cinematographer Enrique Chediak's invigorating camerawork make the Lionsgate release an easy watch and a big improvement over the studio's recent sci-fi snooze, Chaos Walking. But the conflicts feel just a tad too routine and the characters too thinly drawn to get the blood flowing.

Which is ironic given that the driving plot point is a bunch of young people liberated from a drug that dulls their senses, suddenly uncorking all their messy rage, lust, jealousy, fear and euphoria in a hermetic environment that puts human nature under an unforgiving microscope.

As Earth's temperatures have risen, causing drought and disease, scientists have sought a new planet that can sustain human life and ensure the survival of the species. They find one with abundant water and oxygen in 2063. Richard (Colin Farrell) is responsible for training the children who will be First Generation passengers on a scouting mission during which they will reproduce on the ship, with their grandchildren ultimately becoming the first colonists at the end of an 86-year voyage.

The children were conceived in test tubes and raised in isolation, so from the start, their blank-slate lab-rat anonymity doesn't augur much attachment to them as characters.

Richard insists on revising the plan and traveling with them, allowing for earlier departure and improved odds of long-term mission success. He serves as caring father figure, teacher and counselor to the kiddie crew, supplementing their virtual classroom. But when the action skips forward ten years into the voyage, they remain largely interchangeable, a multicultural youth delegation outfitted in chic utilitarian navy separates, like a CW reimagining of Solaris.

Of course, their lack of individuality is part of the point, given that they line up each day for a dose of "The Blue," a supposed vitamin supplement that actually serves to keep them docile, controlling their impulses and suppressing their capacity to feel pleasure, pain or desire.

When smart, questioning Christopher (Tye Sheridan) discovers the drug hidden in The Blue, he feels betrayed and manipulated by the mission, while the quiet, intense chief medical officer Sela (Lily-Rose Depp) observes bleakly that the lives of the First Generation are unimportant, and only the Third Generation will matter.

That burgeoning existential crisis takes hold when Christopher and his spiky buddy Zac (Fionn Whitehead) stop taking The Blue and for the first time experience the surge of testosterone in their bodies. As they charge down the ship's corridors or wrestle in the gym, their still-narcotized fellow crew look on in consternation. When episodes of violence or uninvited sexual advances start occurring, Richard reminds them of the rules. But the thrill of breaking those rules has already taken root.

The big shift happens relatively early in the movie when Richard and Christopher suit up and go outside to repair an external transmitter and an incident takes the most responsible adult on board out of the equation. At the same time, strange noises spark talk of an alien, which merely dangles the promise of a more exciting sci-fi movie than this one.

When it becomes necessary to choose a new chief officer, the election of Christopher doesn't sit well with increasingly aggressive Zac, who was always just one or two sedative doses away from becoming a bullying douche. He convinces other crew members to stop taking The Blue and start ignoring their designated responsibilities. He gathers followers in a splinter group and spreads paranoia about the alien threat while undermining Christopher's attempts to instill order and hitting on Sela with noxious entitlement.

By that point, mutiny and a vicious power standoff are inevitable. The insurgency acquires deadly force when they bust into a pod loaded with weaponry, another secret withheld from them by mission control.

The movie makes no claims to be a cerebral space-exploration survival drama along the lines of, say, Interstellar. But Burger (Limitless, Divergent) seems less interested in building tension through physical clashes and sudden bursts of bloodshed than in contemplating the essential struggles of human nature when all controls are removed and self-interest takes the place of mutual care or dedication to a greater cause. Which would be fine if the characters weren't such basic outlines.

Aside from Sheridan, Depp and Whitehead, all of whom do what they can within the script's limitations, only Quintessa Swindell as the meek do-gooder and Archie Madekwe as Zac's blind-sheep deputy get to imprint any personality on their roles. And Farrell is given even less scope.

This is a polished-looking film, thanks to Chediak's agile camera and Scott Chambliss' austere production design, with its cool, blue-lit sterility. And Trevor Gureckis' juddering synth score feeds the mood of claustrophobic dread. But it's a problem that the scenes of anesthetized compliance in the cafeteria, classroom, gym or sleeping quarters are more arresting than the escalating friction, including a brutal fight for survival in an airlock. Despite its descent into nihilistic disorder, Voyagers ultimately doesn't travel far from familiar conflicts.