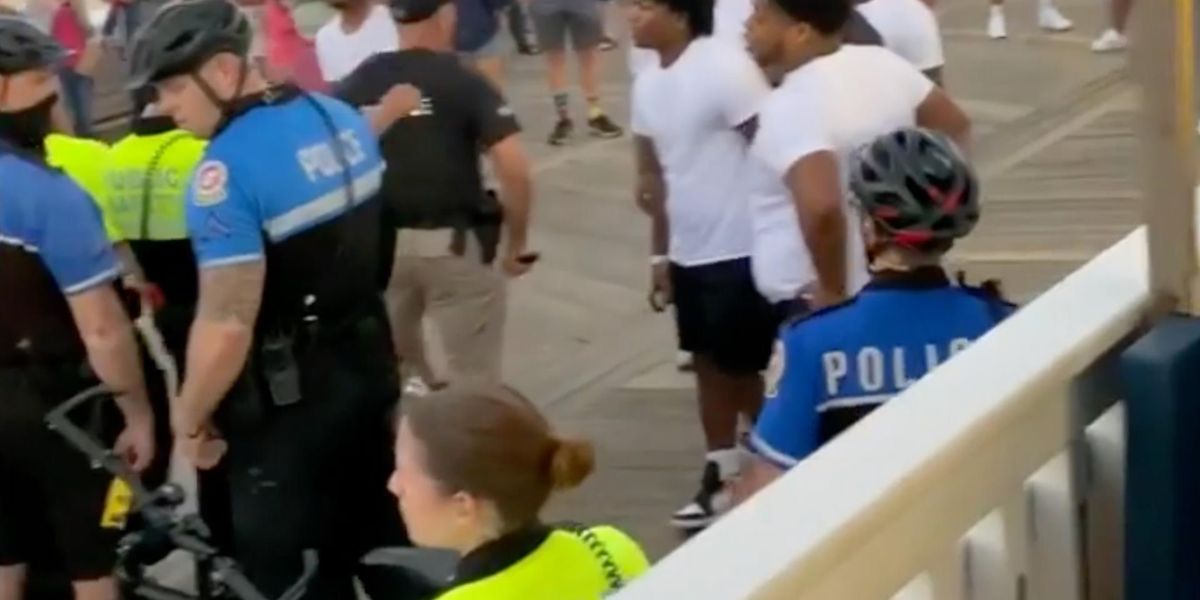 A group of black teens are speaking out after a video showed their now-viral arrest, ABC News reported.

Ocean City, Maryland, police officers arrested a group teens Saturday after one of them reportedly refused to adhere to the smoking and vaping ban on the coastal beach town's boardwalk.

Footage of the arrest quickly went viral on social media, prompting outcry against excessive use of force after police were seen tackling and appearing to knee at least one of the subjects during the incident.

Brian Anderson, 19 years old, from Harrisburg, Pennsylvania, told "Good Morning America" Tuesday that he and his friends are "glad" that he "came out alive" and is urging people to take a stand against police brutality.

Anderson, who was visiting Ocean City with four of his friends over the weekend, said that he and his companions were walking along the boardwalk on Saturday night when a public safety officer stopped the group and asked him to refrain from using his vape pen on the boardwalk.

A press release from the Ocean City Police Department stated that officers witnessed Anderson resume vaping after he was asked to stop, violating a local ordinance prohibiting smoking and vaping in certain boardwalk areas. Anderson and his friends, however, claim that he stopped vaping as they continued walking and that the group of officers soon began following the friends down the boardwalk.

"I asked [an officer] what was the problem and they were like, 'Tell your boy to put his pen away,'" Jahtique John Lewis, one of the teens, recalled. "As I turned around, we see public safety and police is crowding us. Next thing I know, Brian is on the floor."

Police said that when they approached the group and asked Anderson to provide ID, he refused and "became disorderly."

At that point, officers said that a large group had massed around the officers as they attempted to detain Anderson for failing to provide ID for the ordinance violation. Officers added that Anderson then "began to resist arrest" and became further combative.

'What are you arresting me for?'

Viral video showed the moment that officers surrounded Anderson and took him to the ground as they demanded he stop resisting. An eyewitness to the incident said that she saw at least "one of the officers knee [Anderson] in the ribs several times after he yelled out, 'What are you arresting me for?'"

The eyewitness, however, said that she did not see the moments that led up to the altercation or arrest.

Lewis said that the officers "abused their power" and acted in an "excessive way," and demanded to know why the officers were using such force. He told the outlet that a bicycle was "thrown" at him after the question, and so he snatched it and "threw it to the side," prompting a scuffle.

Police said that Lewis reportedly shoved a public safety aide while shouting profanities and then reportedly picked up a police bike and attempted to strike the aide with it. Officers were reportedly able to wrest away the bicycle, but Lewis then reportedly assaulted the aide again and resisted arrest. Video did, indeed, capture the moment where a subject identified as Lewis can be seen throwing the police bike toward an officer.

Authorities also said that Kamere Day, a 19-year-old with the group, reportedly refused to comply with related orders and attempted to approach the officers while yelling profanities. Officers were reportedly forced to detain him after he refused to back off. Authorities said that Day, too, resisted arrest.

'I could have been killed'

Day reasoned that he and his friends were "just scared at the time" and "didn't know what else to do" because they believed they were "attacked for no reason."

Authorities also said that Khalil Warren, a 19-year-old with the group, also "became disorderly" during the fracas and also resisted arrest.

Warren said that he believed police officers could have handled the situation in a different way.

"I feel like they could've just talked to us about it instead of having to be so physical," Warren said.

'Our police department's first priority is to protect and serve'

In a Sunday press release, the Ocean City Police Department said, "All uses of force go through a detailed review process. The uses of force from these arrests will go through a multi-level examination by the Assistant Patrol Commander, the Division Commander, and then by the Office of Professional Standards."

In a statement to ABC News, a spokesperson for the Ocean City Police Department said, "While the use of force is never the intended outcome, our police department's first priority is to protect and serve. They do not target based on race or age."

"While the Town of Ocean City does have an ordinance that prohibits vaping/smoking on the Boardwalk, this by itself is not an arrestable offense," Meehan said Monday. "It is a municipal infraction and subject to a fine. Refusal to comply with warnings to stop vaping/smoking resulted in the officers asking for ID to issue a citation. It was only after the individuals refused to provide identification that this became an arrestable offense."

"Another friend who was present during the incident, 19-year-old Gage Patterson, was arrested by the Worcester County Sheriff's Office but the charges were unclear," ABC News reported. "He told ABC News that the officers used a stun gun on him. ABC News has reached out to the sheriff's office for comment."

"Don't be afraid to stand up for what you believe in," Anderson said on during the Tuesday morning interview.

In the last several weeks alone, crime has surged across the seasonal beach town, filling authorities' hands with myriad problems.

An April report also found that serious crime spiked by at least 21% in 2020, and the trend appears to continue into 2021. The report noted, "In recent years, the annual report has painted a rosy picture of steadily declining serious crime rates. Late year, however, Part 1, or serious crimes such as assaults, robberies, rapes, and burglaries for example, increased by 21%."

The 2020 incidents reversed the trend of a steadily decline over the previous five years, according to the report, and in 2018, serious crime in the area had dipped to a 28-year low.

Of 2020, Ocean City Police Chief Ross Buzurro said, "The year 2020 was a challenging time, not just for Ocean City, but the entire country as we fought our way through the ongoing COVID-19 pandemic. I applaud the efforts of the men and women of this agency for making the sacrifice to work the front lines through this pandemic and the challenges we faced in 2020."