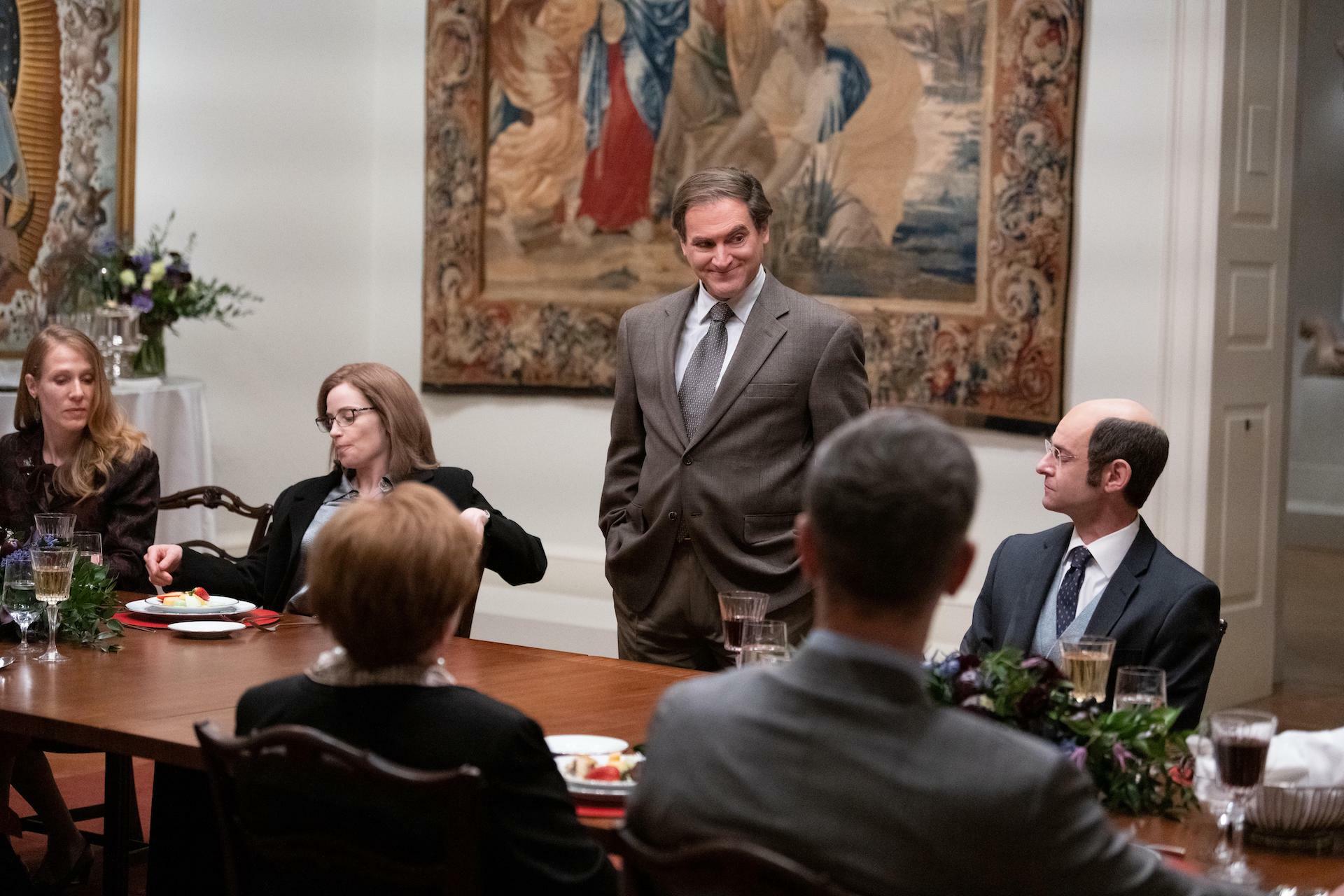 If there's one thing the era of prestige TV has taught us, it's that people watch television for different reasons. Some people want their shows to teach them new things and change how they think; others just want to be entertained. Dopesick is a new television on Hulu that tells the maddening semi-fictionalized history of how the Sackler family and Purdue Pharma changed the global landscape of opioid addiction by inventing and mass marketing the painkiller Oxycontin. It is not entertaining at all. Dopesick is oddly paced, confusingly scripted, and a huge bummer. Its merits lie in that other reason people watch TV, because its educational and perspective-shifting potential are too valuable to pass up.

Dopesick is a difficult show to watch for two reasons. The first is the subject matter, which is heartbreaking and infuriating in equal measure. Learning the depths of the Sackler family's greed and Purdue Pharma's institutional lack of concern for human life is upsetting, but that upset is reasonable and necessary. The second reason is the literal difficulty in watching a show that covers six different narratives that take place over two decades and are presented in a complex non-linear format.

The intention behind Dopesick's time jumping, which moves from the creation of Oxycontin in the early 90s to the various legal challenges brought against Purdue Pharma in the 00s, is noble. It's primarily used to show the inception of a particular marketing idea or oversight and then flash forward to a courtroom scene where Purdue's lawyers attempt to lie about what the audience has just seen. Sometimes, however, those reveals happen backwards, with courtroom scenes taking place in the early 2000s shedding light on events in the 90s. Overall it's a confusing and unnecessary story element that makes it difficult to remember when exactly any given scene takes place in the narrative.

Further compounding the scattershot story issues are the sheer number of plotlines to follow. There's the story of Betsy (Kaitlyn Dever), a lesbian coal miner who wants to leave her Appalaichan hometown for a more queer-friendly city but falls into addiction when her doctor prescribes Oxycontin for a minor back injury. The doctor, Samuel Finnix (Michael Keaton), also has a story that sheds light on how Purdue Pharma marketed Oxycontin to medical care providers. Billy (Will Poulter) is the Purdue rep who convinces Dr. Finnix to prescribe Oxycontin, and following him gives a behind-the-scenes look at Purdue's marketing lies; for some reason Dopesick also spends way too much time on a subplot where Billy's trying to bang his coworker Amber (Philippa Soo).

But wait, there's more. Rosario Dawson plays Bridget Meyer, a DEA agent whose early alarms on Oxycontin's destructive capabilities went unanswered. A pair of lawyers bite off more than they can chew when they decide to find a way to nail Purdue Pharma for criminal misbranding. Finally, there's the Purdue company drama around Richard Sackler's (Michael Stuhlbarg) manipulative rise to power, which offers a close look at exactly how morally anhedonic the billionaire family that singe-handedly engineered the opioid crisis can be. Any single one of these plots could be their own TV show. Instead, Dopesick viewers are expected to watch all six potential shows at once.

Everyone in the world should know what Purdue Pharma knew about Oxycontin, when they knew it, and how much they profited from engineering this crisis.

Dopesick's overcrowded run time is unfortunate, because most of those individual stories are very interesting. Betsy and Dr. Finnix offer an intimate look at how easy it is to fall into addiction with Oxycontin and the effects of said addiction on their personal lives and relationships. Both Dever and Keaton deliver strong performances that generate empathy for the typically maligned population of opioid addicts. Billy and the Sacklers together form a disturbing picture of a company that knew what Oxycontin was capable of and still pushed the drug to near ubiquity, and Poulter's portrayal of Billy's slowly stirring moral compass is a highlight (everything about the Sackler plotline is repulsive, but that's not the actors' faults).

The DEA and legal plots are fine, but both of them contain prime examples of where Dopesick goes wrong — they're rife with cliche sub-subplots wherein the effort of fighting Purdue ruins everyone's marriages and with so much else to pay attention to, it's impossible to care.

That's the main problem with Dopesick. It attempts to cover the opioid epidemic from every angle and only succeeds in spreading itself too thin. The multitude of factors, problems, oversights, choices, and social evils that led to the destruction of hundreds of thousands of lives is simply too much to capture in one television series. Dopesick being overwhelming and confusing is a reflection of its subject matter, which is why it's still a series many people would benefit from experiencing.

Though Dopesick is not a documentary, it acts as a fictionalized primer for a curious population that deserves more information about the opioid epidemic. Everyone in the world should know what Purdue Pharma knew about Oxycontin, when they knew it, and how much they profited from engineering this crisis. Dopesick is not a television show people should watch to be entertained. It's a show people should watch to get angry.