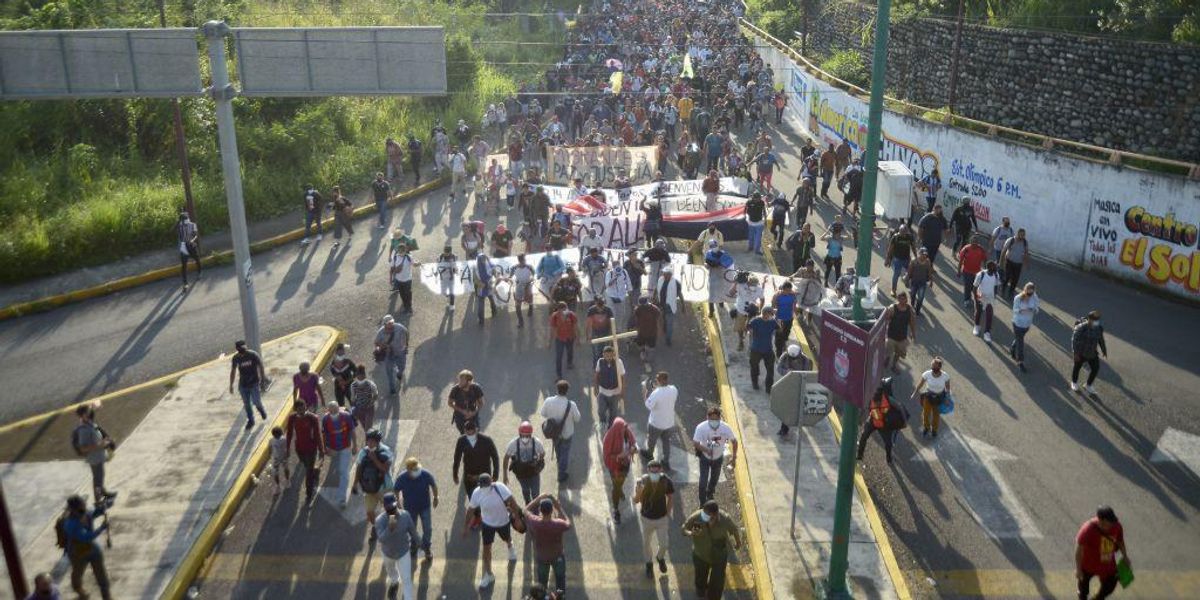 Several thousand migrants from Haiti, South America, and Central America are making their way north to the southern border of the United States. Mexican law enforcement attempted to utilize a roadblock to stop the massive migrant caravan in southern Mexico, but the migrants easily steamrolled their way past the large group of officers.

Approximately 3,000 migrants marched in the southern Mexican city of Tapachula – about 10 miles from the Guatemala border. There are reports that members of the caravan were carrying signs with President Joe Biden's name on them, including one that read: "Joe Biden Is For All."

#BREAKING Thousands of migrants marching from Tapachula and are using a rope to stay together so “no one falls behi… https://t.co/bts36zdQAJ

NOW - Large migrant caravan has left Tapachula, Mexico for the US. https://t.co/EprRkn62iv

The Mexican National Guard established a roadblock – fortified by some 400 law enforcement officers. Video shows the migrant caravan overwhelming the Mexican force and bulldozing the officers who were equipped with shields and anti-riot gear.

Mujica said the migrants should be given an opportunity to work in Mexico "because a lot of them don't want to be brought to the U.S. but the Biden administration, with this administration, it's like pulling them like cattle, first they come to this jail and then they go to the northern border."

Mujica then said President Biden "doesn't seem to have a clue what to do with immigration."

"They're just in denial of their own fault. They haven't been able to handle immigration," Mujica said of the Biden administration. "If I tell you the truth, I believe at least with Donald Trump we knew what we had. With Biden, we don't know. He doesn't seem to have a clue what to do with immigration because he says one thing and does another."

Immigration activist, Irineo Mujica says the current administration is in denial when it comes to the crisis at the… https://t.co/MuWs7rbws3

Under the Migrant Protection Protocols, migrant asylum seekers must wait in Mexico for their U.S. court hearings.

Last year, U.S. Customs and Border Protection made a record number of illegal immigrant arrests along the U.S.-Mexico border. A report found that more than 1.7 million border arrests were made in the 2021 fiscal year, beating the previous record set in 1986.